“Despite the economic challenges in agriculture and energy, several of our underlying businesses are having a solid year,” said CHS President and Chief Executive Officer Jay Debertin. “Unfortunately, we’ve experienced three negative one-time events this fiscal year that have resulted in charges leading to a loss in the third quarter and a significant earnings decline for the year to date. In response to these events, we are implementing measures to better identify risk management gaps in some of our processes and when necessary enhance our ability to effectively manage our risks.”

Pretax income for the nine-month period ended May 31, 2017, was $40.0 million, compared to $407.9 million for the nine-month period ended May 31, 2016. The decrease is primarily the result of charges related to a Brazilian trading partner entering into bankruptcy proceedings under Brazilian law, loan loss reserve charges, of which a significant portion relate to a single large producer borrower, and asset impairment charges.

“Throughout the world, agriculture and energy markets remain unpredictable and our owners and customers depend on us, so it’s our job to be prepared to succeed in any economic environment,” said Debertin. “That’s why we’re committed to improving our risk management practices across our businesses. Additionally we are refocusing on the areas we know best and in parts of the world where we need to be to serve the U.S. farmer. We will do this based on the core values and tenets CHS has built on for more than 85 years: trust, partnership and opportunity.”

The CHS Energy segment experienced a loss before income taxes of $9.3 million for the three months ended May 31, 2017, compared to income before taxes of $109.4 million for the same period in fiscal 2016. Results were primarily due to significantly reduced refining margins and a $32.7 million charge incurred due to a cancelled capital project. The company’s propane, transportation and lubricants businesses experienced decreases in earnings compared to the same period a year ago.

The CHS Ag segment, which includes domestic and global grain marketing and crop nutrients businesses, renewable fuels, local retail operations, and processing and food ingredients, generated a loss before income taxes of $221.2 million for the three months ended May 31, 2017, compared to income before taxes of $24.2 million for the same period in fiscal 2016. Grain marketing earnings decreased primarily due to a $230 million charge driven by a trading partner in Brazil entering bankruptcy proceedings under Brazilian law. The wholesale crop nutrients and renewable fuels businesses experienced decreases due to lower margins. The processing and food ingredients business earnings decreased primarily due to impairment charges taken on certain assets during the three months ended May 31, 2017. Country Operations earnings increased due primarily to increased volumes.

The company’s Foods segment, previously reported as a component of Corporate and Other, generated pretax earnings of $7.0 million during the third quarter of fiscal 2017, compared to $17.0 million in the same period the previous year. The decreases were primarily due to reduced margins at Ventura Foods, LLC, the investment that makes up the Foods segment.

The Corporate and Other segment generated pretax income of $5.6 million during the third quarter of fiscal 2017, compared to $18.9 million during the same time period the previous year. Earnings in this category are primarily derived from the company’s equity investment in the Ardent Mills, LLC, wheat milling joint venture and our Business Solutions operations. 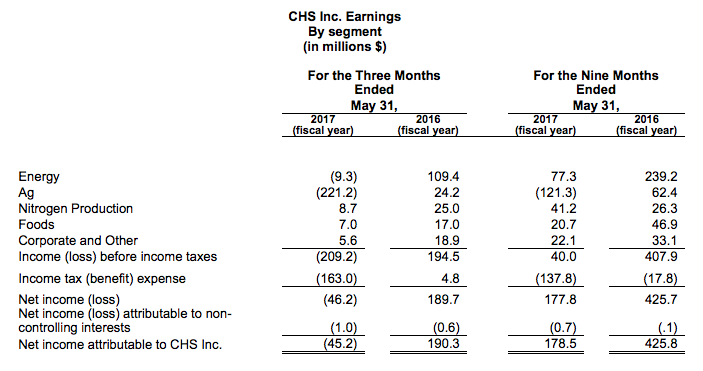